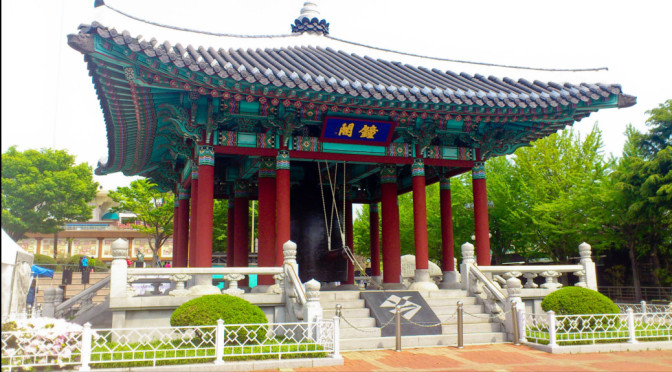 To extend my stay for 3 more months in Japan the rule is that you need to go out of the country. So I did this. i went for a very short weekend to Busan, South Korea. I went with the Beedle. A strange ferry that makes the sound like you are in a plane. After 3 hours I arrived in Busan.

The first thing I did after they let me in the country was getting money. I did not really know how much money I needed and how much the money was. So I randomly took some. 150 000 Won. Sounds so much in the end it was only a bit more then 100 euro.

Because I arrived late that day I only decided to find food and then went back to my hotel. The next day I decided to walk to the Korean war memorial sign. On the map it was not so far so I started walking. The stairs I needed to take to get there were a real hell. I think at the end I climbed 500 meters up. I got a bit lost and ended up in a forest. It was very nice there. and sometimes I met people that were dressed like they were climbing a mount everest.

When I found my way out of the forrest I went to the memorial statue of the Korean war. It was really impressive. Ather that I went to a very small museum that was dedicated to the uprise of Korean student that were against the Japanese occupation. Good thing I have seen Bridal mask. Other wise it would be difficult to understand, (there was no english translating)

After I went down, I went to Busan tower. There I found out that there was a performance of traditional Korean music instruments. I decided to watch this. I loved it. There was even a english translator that talked to me. Afterwards we went drinking a cup of coffee and talked about Europe and Korean/Japan.

In the evening I met with a Korean friend I know form one of my japanese language partners. We went eating Korean BBQ. Really korean food is just so nice. Only for that I want to go back. We had a great evening. I can not wait until he comes over to Fukuoka.

On my last day I needed to check out of the hotel at 10 o’clock. So I needed to do thing until my ferry left for Japan again. After 2 days I still had more than 90 euro I needed to spend. So I decided to go shopping. at the end I bought some Ost, a traditional amulet Korean woman wear and some candy. I do not think Busan is a perfect place for shopping, I prefer Fukuoka. But I spend almost all my mon

Then It was time to go back back to Japan to start the second part of my stay here ^^.